After the awesome show I went to last night, which I will tell you all about later, I went to an awesome party featuring bands, ponies, and a pie-eating contest.  Yes, I said ponies.  There were two of them.

Anyway I was watching one of the bands play some rockabilly in the living room, when someone let it rip, something fierce. And there were enough people to blame it on, but I made eye contact with the guy standing next to me and I said, "Someone's just making popcorn."  He laughed and blamed me and then walked away.  Later I saw him outside and the blame continued.

I honestly thought someone had made popcorn, but the culprit later admitted it to me when he let one go again.  How much popcorn does one man have to eat to make it stink like that?!

Drew and I hit it off but I guess he could never get past the thought that my farts could smell so bad, I later saw him hitting on another lady, whose farts probably smell like roses.

I went to see We Are Augustines at the Corona last night, and although I got there a few minutes late, I bumped myself up front just a few feet away from the handsome singer.  Did I mention how good-looking he is?  PS-Go listen to their music.  They're going to be huge.

It's so inspiring to watch someone perform like it's the greatest gift they have ever received.  Like they know how blessed they are and how lucky they are to be doing what they're doing... It's awesome.  I've seen plenty of bands who fake it.  But this band owns it.  They're grateful and down-to-earth.  After their performance they hung out by the bar while Band of Skulls took the stage.

"This is my chance," I thought.  Their drummer walked by me and smiled.  Later we crossed paths again and he said hello.  Okay, I'm star-struck.  I can't help it.  I love this band.

And then, like a magical gift from God, I felt Billy McCarthy's presence directly to my left.  There he was, as if he wanted to say hello.  haha.  My whole body heated up and my heart started beating like a punk rock drum kit.  I did the fake looking past him as he glanced over and then I made my move.

"Great show."  "Oh thanks, thanks, I'm Billy, what's your name?" And he reached out and shook my hand.  "Katie."  And then I asked him about his ripped shirt.  He laughed and blamed it on his size and then I laughed and blamed it on his muscles.  HA.  I asked him about their tour and it was a blissful five minute conversation.  Eventually he returned to his bandmates, but I thought, "Damn.... My life is complete."

So many times I have chickened out on great opportunities out of insecurity and doubt.  But if I can approach the singer of an awesome band that I love and not sound like total basketcase, I think I'll be alright.  Even if we happen to meet over a fart.

Popular posts from this blog

It was 2008.  And for some reason Tig Notaro and her daughter were at this employment event (I'm job hunting like crazy right now). Anyway, her daughter gets the job search machine going, which is clearly an old, clunky electronic, but anyway, it's supposed to help me find a job.  And it's so easy to use, a kid can do it.

So she spins the wheel or whatever, and I'm thinking in my head, "This is Tig Notaro. I am currently time travelling and have a brief moment to ask Tig whatever the hell I want."  So I looked at her as she was starting to turn away from me, and the lucid moment was starting to lift back to waking life, and I asked her, "what do you wish you did more when you were just starting out as a writer?"  And then I was like Tig?  Tig?  Cuz she was walking away of course... Because the dream moment was too precious... and she turned and said TALK TO PEOPLE.  And then we were across the hall …
Read more 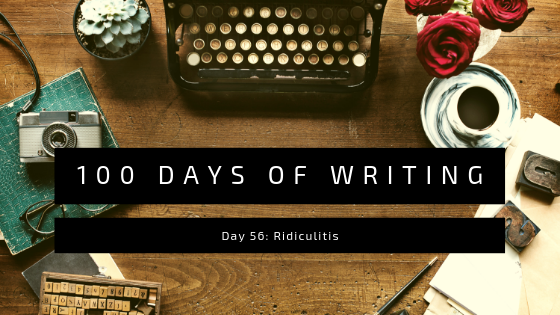 I've almost finished my first spec script.  It sucks, and I'm not afraid to admit it.  But! The experience of writing a synopsis, then an outline, and then the script, has been super helpful.  It's so much easier to follow than to do what I've done in the past, which is to just wing it.

It's too short, and the monologuist in me has written too many scenes that don't involve other people.  How do you convey a story when a character is alone?  I'm all about the inner thinking, but that's not TV.  I'll have to go back and beef up the scenes to flesh out the dialogue more.  I suppose it's a skeleton script for now, and that's A OKAY.

Things have gotten so crazy I've barely made time to write.  I've gone out a few times with the old journal, but I still want to get to 100 posts this year on this thing.  I'm happy to be just over halfway there.

Katie Leggitt
Montreal, Quebec, Canada
Katie Leggitt is a character comedian, writer, and educator. She seeks to encourage others to think profoundly about their existence and laugh at themselves in the process. Having performed comedy in Montreal for over a decade, she has been busy collecting stories and experiences destined for the stage since moving to Toron.. oh you know the rest. There's no place like home!